Nonchalant ~ Top 10 phrases Lesbians and Bisexuals are tired of hearing

Les-be real here, however you identify, as a woman loving woman you have probably faced your fair share of ignorance. Whether it’s come from family, friends, random strangers or that old lady at the bus stop, people rarely engage their brain before speaking.  We’ve put together our top ten phrases Lesbians and Bisexuals are tired of hearing.

Now this old chestnut is often heard in your early coming out journey, by literally everyone you tell. How can you possibly be sure that you enjoy the lady garden and that your preference for the same sex is not just confusion after watching one too many L word episodes.

Following on from being asked if you are sure, those who are still adamant you can’t possibly know your own mind, may also brush it off as a phase. Being an emo is a phase, wearing neon leg warmers is a phase. Being a homosexual is not a phase. While sexuality is fluid and may change over time, that is called personal development, not a phase.

Well considering men make up 49% of the population, most of us have interacted with at least one man at some point in our lives. They just don’t give us the same thrill. When we’re watching James Bond, we don’t want to be the Bond girl, we want to be with the Bond girl. Men are great, but like coffee, we don’t want them near our vaginas.

Because fashion has no gender Karen, and how you dress does not dictate what gender you’re interested in. This prejudice is wildly outdated, and with androgynous fashion becoming more popular for both queer and straight women, looking ‘masculine’ does not dictate your sexuality.

Linked to the above, but on the other side of the spectrum. Yes, not all queer women have a nose ring and an undercut. There is no right way to look gay and again how you dress does not dictate what gender gets you going. Erasing the vast spectrum of queer women and thinking that there can only be one type of lesbian just enforces outdated stereotypes.

Ah this question, one that plagues many of us, especially on nights out and normally from men. The second you start to show affection to your same sex partner, you can usually spot someone watching, with wide eyes and a manic smile. 30 seconds later you’re being being propositioned and then about ten before you walk away in disgust. Please stop asking us this, we are not there to fulfil your fantasy.

Yes, Karen every woman we come across we just must hit on. No! Just like most people, attraction is not based on gender alone. Surprisingly other factors come into this, and one of the biggest is ‘are you also interested in me?’ So straight girls, no we are not going to ask you out on a date or try and kiss you.

Kissing someone or holding hands with someone of the same sex is one of the most terrifying steps to take when you first come out. The above phrase just reinforces that who you love is something to be hidden and that is not the case. In order to break down prejudice and ignorance it’s important to normalise queer relationships. If you don’t want to see it, don’t look! 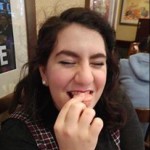 I’m a twenty-something Londoner who strives to consistently look on the bright side of life. By day I’m normally rushing around the city coffee in hand, and by night I’ll be found curled up on the sofa watching Kath & Kim.

Buy Us a Beer